Hom Nguyen belongs to a generation of immigrant children. Growing up on the streets of Paris, he became a shoeshine boy to support his family.

The vocation of the Abbé Pierre Foundation has a special resonance for Hom Nguyen. A tireless defender of his fight against precariousness, the artist today dedicates his inventive and unifying art to Abbé Pierre, a symbol of Humanity.

On the occasion of World Art Day, the artist came to present the portrait of the “Founding Father” in person to Christophe Robert (General Delegate) and Laurent Desmard, Director of the Foundation and former private secretary to Abbé Pierre from 1999 until his death in 2007.

Hom Nguyen’s tribute reminds us that it is more necessary than ever to support the Abbé Pierre Foundation, which helps the most vulnerable. 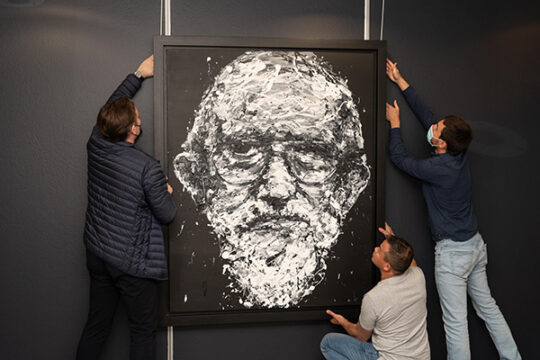