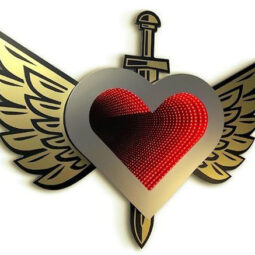 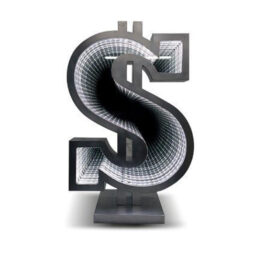 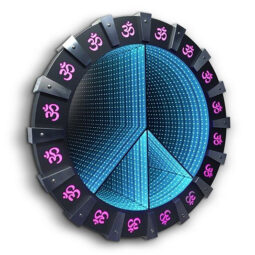 NoArt is a French artist born in 1965. First, he spent the first part of his artistic career recreating and revisiting impossible worlds, linked to the teeming imaginaries of Jules Vernes or J. M. Barrie, in a Steam Punk aesthetic, close to the urban scene and other subcultures, while making gaps in all the other directions offered to his imagination.

From this period, NoArt keeps the taste of fun and the re-enchantment of an imperfect world. For the past 10 years, the luminokinetic universe has burst into the artist’s practice, which he falsely transposes into the field of design, sometimes with a kitsch aesthetic, to better divert the codes of contemporary society. Mischievousness is there and the return to the games of form and language are the weapons of a Peter Pan who has become an adult but who, as a slightly mad inventor, still has a disillusioned look at our daily lives: everything is turned upside down to create a laugh of resistance.

Bling, rhinestones and sequins that seem to reflect money and power are in the spotlight, NoArt creates nose-feet. Thus, from its safes (luminous mirrors reflecting infinite wealth), armoured rickshaws (symbol of the point of tension between the poor and the wealthy), Offshore Machines (washing machines for laundering money), through ATMs, to the real scale vault, NoArt sets out the excesses of obsession and thirst for money. Indeed, as a mirror, it mocks but nevertheless proposes another way, always anchored in science fiction: vortexes that are like real doors to elsewhere or Organic modules where the machine seems to become alive and the light, a flow of a soothing and comforting energy. Always in play of appearances and deceiving the eye, magic works and puts us in front of a choice: connivance and impertinence or a beautiful escape.