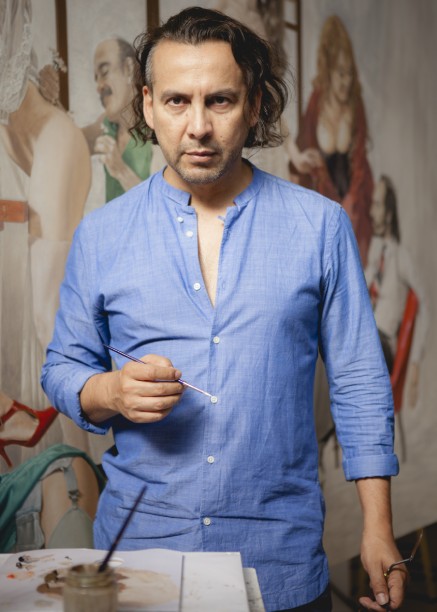 Sergio Martínez was born in Concepción (Chile) in 1966. He particularly likes to explore the effect of light on the human body. He paints mainly with oil on canvas, superimposing glazes of soft colours to obtain the colour palette he wishes to infuse into the scene.

During his youth he won a number of awards, which helped him to understand the true importance of his relationship with the visual arts and thus began his process of self-study.

At first he moved towards descriptive realism and showed a great mastery of form and an elegant and restrained use of colour in his landscapes, which are his main subject.

In 1987 he married Lizeth, who became the subject of his first portraits and nudes, with which he discovered a new challenge in the human form. He proved this by making the nude the subject that, from the 1990s onwards, dominated almost all his paintings.

He is associated with the Pre-Raphaelites because of the interesting interpretative brushstrokes in his compositions, and the effects of volume and light do not seem difficult to him.

For eleven years he ran his own painting workshops (1992-2003) in Concepción, Chile, with a large number of people with whom he exhibited important works in the city.