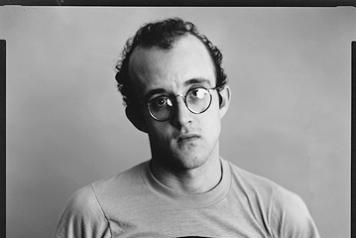 Keith Haring, born on May 4, 1958, is an American drawing artist considered an emblematic figure of contemporary and pop art.

After graduating from high school in 1976, Haring enrolled at the Ivy School of Professional Art in Pittsburgh, quickly realizing that he had little interest in a career as a graphic designer in advertising and, after two semesters, he dropped out.

That same year, Haring moved to New York City and enrolled at the School of Visual Arts (SVA). In New York City, Haring found a thriving alternative arts community growing outside the gallery and museum system, on the streets, in the underground and in club spaces and former dance halls. There he befriends fellow artists Kenny Scharf and Jean-Michel Basquiat, as well as performing artists and graffiti artists. Haring is swept away by the energy and spirit of this scene and participates in exhibitions and shows at Club 57 and other alternative venues.

He experiments with performance, video, installation and collage, while always maintaining a strong commitment to drawing. In 1980, Haring found a very effective way to communicate with the wider audience he wanted, when he noticed unused billboards covered with matte black paper in an underground station. He began drawing with white chalk on these blank paper billboards throughout the underground. Between 1980 and 1985, Haring produced hundreds of these public drawings in fast, rhythmic lines, sometimes creating as many as forty “underground drawings” in one day. The underground became, as Haring put it, a “laboratory” for developing his ideas and experimenting with his simple lines.

During his brief but intense career that spanned the 1980s, Haring’s work was presented in over 100 solo and group exhibitions. By expressing universal concepts of birth, death, love, sex and war, using the primacy of line and the frankness of message, Haring was able to attract a wide audience and ensure the accessibility and durability of his imagery, which became a universally recognized visual language of the 20th century.