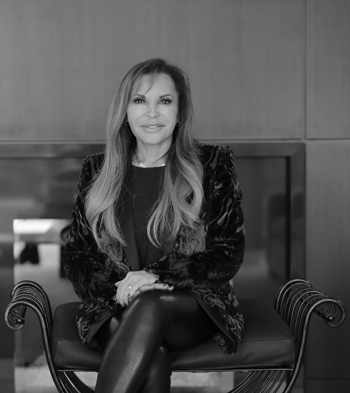 Carole A. Feuerman is acknowledged, alongside Duane Hanson and John D’Andrea, as one of the three major American hyperrealist sculptors that started the movement in the 1970’s.

Feuerman’s career spans over five decades and four continents. Through her sculptures, she creates visual manifestations of the stories she wants to tell, of strength, survival, and balance.

She has taught, lectured, and given workshops at the Metropolitan Museum of Art, the Solomon Guggenheim Museum, Columbia University, and Grounds for Sculpture. In 2011, she founded the Carole A. Feuerman Sculpture Foundation. Her work was included in An American Odyssey 1945-1980 with the most prominent artists of the American Post-WWII era. A comprehensive one-person show in 2005 was held at the QCC Art Museum/CUNY titled Resin to Bronze Topographies. It was followed by the installation of her work at the Grounds for Sculpture in New Jersey.

Carole A.Feuerman has had solo museum retrospectives at the El Paso Museum in Texas, the Huan Tai Hu Museum of Jiangsu Province in China, the Amerillo Art Museum, the Tampa Museum, the Southern Allegneny Museum, QCC, CUNY Museum, and the Queens Museum of Art. In 2009, she exhibited her sculpture “Moran” in the Palazzo Strozzi in Florence in a show called Art of Illusions, Masterpieces of Tromp L’oeil from Antiquity to the Present. In 2013, her sculpture, “The General’s Daughter” was exhibited at the National Portrait Gallery in the Smithsonian Institution, Washington, DC. Her sculpture “Monumental Quan” was exhibited in the Frederik Meijer Sculpture Garden in Grand Rapids, Michigan. In 2007, Feuerman had a solo exhibition in Venice called Bellezza E Beressaze: By the Sea, in the Venice Biennale, curated by John T. Spike, featuring her monumental sculpture “Survival of Serena” In 2008, ‘“Survival of Serena” was chosen ‘Best in The Show’ at the Beijing Biennale and was exhibited at the National Museum of China. “The Golden Mean” debuted in 2017 at her solo show in Giardini Marinaressa for Personal Structures – Open Borders at the Venice Biennale. In 2013, “Survival of Serena” was chosen by New York City Department of Parks & Recreation for exhibition in Soho, New York and again in 2017 it was exhibited in Central Park for their celebration of 50 Years of Public Art in NYC Parks. In 2018, Feuerman had a solo outdoor exhibition in Knokke-Heist, Belgium. In 2019-2020, she had nine monumental sculptures on the Champs- Élysées and Avenue George V. Her iconic sculptures, “Catalina”and “The General’s Daughter”, are traveling in a group show titled 50 Years of Hyperrealistic Sculpture.