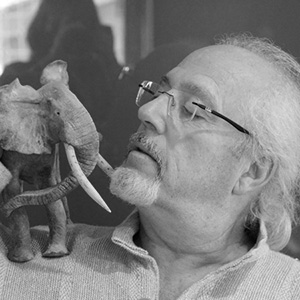 Van den Berghe the sculptor was born François VANDENBERGHE, in the Eure et Loir region of France. He is strongly influenced by the twenty seven years he spent in Gabon where he knew sporting glory, winning several titles in both motorbike and car racing championships. He was also creator and expedition leader of the famous Challenge d’Equateur, elected event of the year in 1986.

It was around this time that he really came into contact with elephants, van den berghe subsequently returned to his native country and has dedicated himself since 1995. Elephants have remained the artist’s favorite subject, his allegorical narratives being enhanced by a troubling realism.

The artist has a profound affinity with each of his pieces, imbuing them all with a passionate elan and through allegory, revealing a truth that makes these pachyderms all the more real. Each sculpture reveals an essence that touches us so much mare profoundly than simple figurative reproductions, an essence that is intimate yet indefinable, an emotional expressed rebellion.