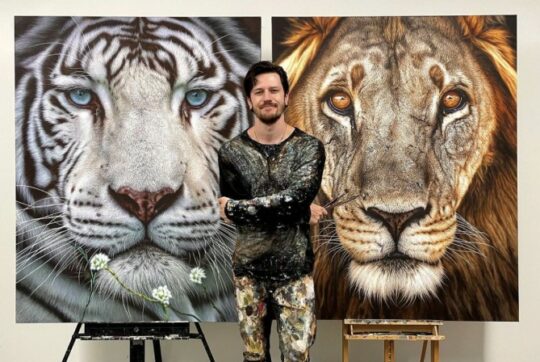 Internationally known artist, Nick Sider, is a self-taught acrylic painter, based out of New York City. Since the age of 5, Nick Sider knew he wanted to be a painter. He grew up with a love and passion for art, but decided to pursue other interests after leaving high school.

At the age of 25, Nick Sider decided to quit his job, teach himself to paint, and begin to pursue his childhood dream of becoming an artist. In 2014 he relocated to New York City and had his first NYC solo show in 2016. Thanks to several viral videos on social media, Nick Sider has gained international recognition for his hyperrealistic paintings and been fortunate to sell his artwork to collectors worldwide.

​While experimenting with a multitude of subject matter, Nick Sider has always maintained a hyperrealistic style, attempting to create paintings that extend beyond what a photograph could ever capture.

“My favorite moment while painting is when a subject on my canvas begins to come alive.” His main goal for his paintings is to use detail and color to create the illusion of life spawning from the canvas. More recently, Nick Sider has been working on a series of large-scale lion and tiger paintings as an ode to his childhood and his obsession with drawing big cats.