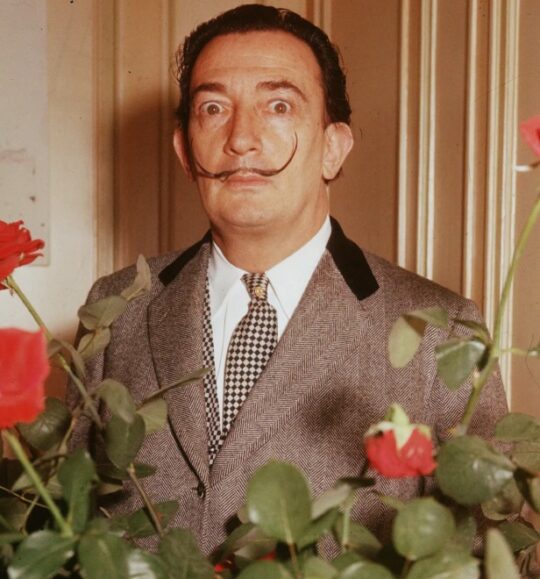 Salvador Dali was born on 11 May 1904 and is a Catalan painter, sculptor, engraver, screenwriter and writer. He is considered one of the main representatives of surrealism. The Catalonia of his childhood will always have a privileged place in his work as in his life. From a very early age, he showed an attraction for figurative art and painting, already revealing his original and inspired personality. He took private drawing lessons.

His parents had lost their first son, also named Salvador. The young Salvador was deeply disturbed when he saw his name on the grave. “All my eccentricities, all my inconsistencies are the tragic constant of my life. I want to prove that I am not the dead brother, but the living one”, he wrote. While Dadaism was at its height in Paris, Dalí was admitted to the San Fernando Institute, the Madrid School of Fine Arts.

In Paris, Dalí met Breton, Eluard, Magritte and Ernst. He officially joined the Surrealist group. In the summer of 1929, the poet Paul Eluard and his wife Elena (Gala) visited the painter in his house in Cadaqués. It was love at first sight between Dalí and this woman. She was to be his “surrealist muse”, the inspiration for his life and his work.

Dalí exhibited in Paris for the first time (11 paintings). During the Second World War, Dalí and Gala moved to the United States. They remained there until 1948. These years were very important for him. The Museum of Modern Art in New York offered Dalí his first retrospective exhibition in 1941.

In 1974, Dalí inaugurated the Teatro Museo Dalí in Figueras, Spain. This event was followed by retrospectives in Paris and London until the end of the decade. After the death of his wife, Gala, in 1982, Dalí’s health began to decline. He died on 23 January 1989.