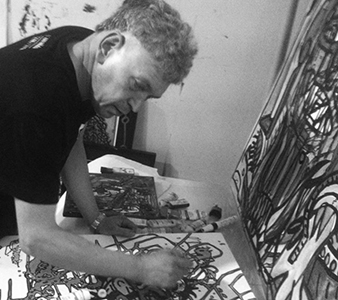 Robert Combas is a French artist, born in 1957. He brought in the early 80s a new figurative painting. Present on the artistic scene since 1979, he has been the creator of the movement that Ben called “Free Figuration”, movement which brought together Rémi Blanchard, François Boisrond, Robert Combas and Hervé Di Rosa. This painting made of freedom, talks about society, violence, sexuality, people suffering, their little happiness, their littleness and their greatness. Robert Combas gets inspiration from Rock’n’Roll music, popular pictures, childhood books, school books, and all that makes an accessible popular culture. He handles everyday life pictures including historical and mythological references. He cultivates a style inspired from graffiti and comics and creates at times a casual and humorous painting, and sometimes as well violent and sensual.