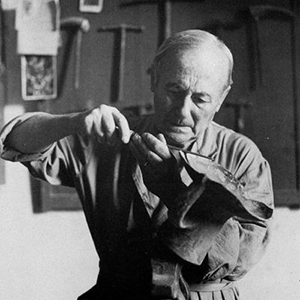 Joan Miro was a Catalan artist born in Barcelona 1893, died in Palma de Mallorca 1983. Painter, sculptor, engraver and ceramist, Joan Miro was one of the leading representatives of the Surrealist movement, marked by the exuberant nature of his native province. His work reflects his interest in the subconscious, for the “childlike” mind and for Spain. At the beginning of his career, his work was strongly influenced by Fauvism, Cubism and Expressionism before evolving towards a flat painting showing a naive side, then moving towards a more dreamlike work with a strong surrealist spirit. By 1912, after a visit to a Cubist painting exhibition and despite the reluctance of his parents, he decided to devote himself to painting. In 1917, he met Picabia in Barcelona. He settled down in Paris in 1920 and joined the artistic community of Montparnasse with Picasso, and the Surrealists. The progressive abolition of the depth of field finally lead his work to a flat painting. Since 1923, he created a style apart from Cubism in which awakened, straight from his imagination, a fantasy universe populated by strange symbols and geometric forms. Miro moved towards an original combination of joyful elements, or at times worrying ones, which would delve deep into his subconscious, his imagination and in poetry. His world is often magic and strange. His subjects and figures are half-way between imagination and reality, they can be of a reckless joy but also of a barely concealed demonic character. In 1924, he signed the Surrealist Manifesto. Described by André Breton as “the most surrealist of us”, Miro gave up wanting to show a real space: his art approaches surrealism by the fantasy and the influence of his unconscious. Over time, his canvas became more abstract and the forms more organic, even if we can always identify a theme in them. In 1925, he participated to his first Surrealists’ collective exhibition. In 1932, Miro came back to Barcelona where he explored different forms of expression, using new materials, creating original sculptures with mysterious tittles. Against Franco, the artist created the famous “Help Spain” poster in 1937 and painted, during the War, his “Constellations” in which he showed his will to escape from his inner anguish. In 1941, the New York Modern Art Museum organized the first great retrospective of his works. In 1944, he created his first ceramics. In the 50s, he was more involved in sculpture, urban furniture and monuments decoration. After the war, his works met a great success. He continued to paint ever more intense and elliptical paintings and finally reached fullness with the “Blue” series in 1961. Miro realized huge commissions, notably monumental ceramics for the UNESCO building in Paris, and painted, under the influence of the American painting, large-format abstract canvas with bright colours. Miro’s work is characterized by its sobriety and its rigour as well as its force and its poetry. In 1976, the Miro Foundation was inaugurated in Barcelona, in memory of the abundant and eclectic creativity of one of the greatest artists of the twentieth century.