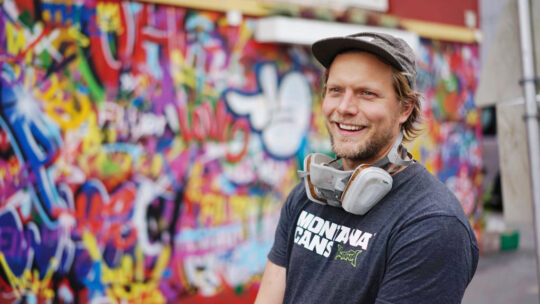 Martin Whatson is a Norwegian street-art artist best known for his calligraphic graffiti on a grayscale basis. Over the past decade, Martin has developed a unique aesthetic combining abstract movement and stencil figurative compositions.

Growing up in Oslo, Norway, Martin was active in the emerging graffiti scene in the early 1990s. The architecture of the city has been a constant inspiration, with the construction and disintegration of each generation contributing to the urban infrastructure. The same deconstruction processes are found in his creative influences with Jose Parla and Cy Twombly.

In the early 2000s, he introduced stencils into his work. This evolution has brought him closer to a simple but effective aesthetic that, in his opinion, could bridge the gap between the passion and spontaneity of graffiti, with the fragility and ephemerality of nature. This balance would define his creative approach.

Martin’s work is part of festivals, projects and walls around the world. His original works can be found in private collections and institutions with solo exhibitions in cities from Tokyo to Los Angeles, London to New York.