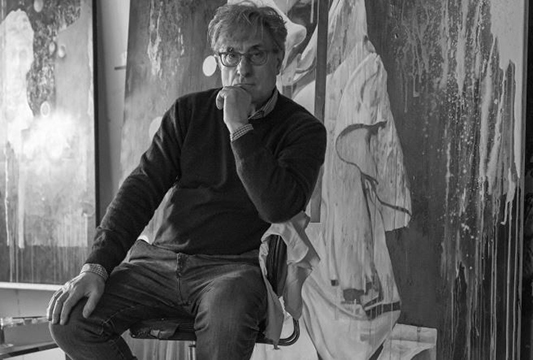 Andrea Vizzini was born on 5 February 1949 in Grotte, Italy, he is a painter and sculptor. He was a scholar of photography techniques to computer art, and was among the initiators of the movement which, in the sixties and seventies – before the Trans-avant-garde -, was oriented towards a return to painting, at the same time as the conceptual currents.

His beginnings are characterized by conceptual painting, using figuration in strange and diverse contexts, contributing exhibitors of the historical nucleus of new figures of the 1970s to the affirmation of the movement. In his paintings, he reconstructs the vision of myth, art history and literature with a visionary look.The history of art and its iconography was the central element of his quest, an “Ante Litteram” preacher of citizenship, and did not join the movement promulgated by Maurizio Calvesi and Enrico Crispolti to continue the way out of the definitive regimes and groupings.

The works of the “Theoretical Interiors” 1980, “Places of Eternity” 1986, “Aniconico Iconic” 1994, characterized by a symbolic system, manifested a world view as a dichotomy of two opposing principles. After using acrylics and collages, he experimented with several materials, including earth, iron and light, embracing at the same time an almost caravaggio form of light, which allowed it deep space effects and the use of a very personal architecture. In 1998, he exhibited in the enchanting area of Pescheria Vecchia d’Este, in the city of Padua, the work of the cycle «Corps à corps». He integrated this artistic language through the production of sculpture and decoration in public places, some works are in the Farnesina Collection. In 2008, at the Beijing Olympic Games, he exhibited at the Beijing Biennale, a work was even acquired by the National Gallery of Fine Arts.

In 2011, at the Castel Nuovo-Maschio Angioino Museum in Naples, he presents a personal exhibition. For the first time, the dialogue between painting and sculpture becomes more watertight and interactive: the essential and chromatic forms are present inside the exhibition, transforming the room into a specular reflection of the pictorial representation.

In 2017, ten years after the death of U.G.Krisnamurti, he begins a search for “non-duality” or “natural reality”. He treats an innumerable amount of work on these reflections, until he realizes that nothing is real, that everything is true and that, therefore, it is not an illusion. He then defines “The end of art” which becomes the title of an exhibition he developed at the Ravagnan Gallery in Venice in July 2017 during the 57th Venice Biennale and the great exhibition of Damien Hirst “Treasures of the wreck of the Incredible” Palazzo Grassi and Punta della Dogana.