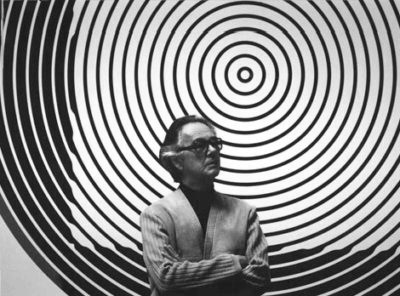 Vasarely was a great representative of ‘Optical Art’ or ‘Op Art’. From 1928 to 1930, he discovered abstract art and ‘Russian Constructivists’ he was taught at the ‘Bauhaus’ in Budapest. In the era of technical reproducibility, he aspired to give a strictly scientific and theoretical basis to his art. In 1930, he moved to Paris where he mainly worked as a graphic designer. In 1944, he came back to painting and tried to reconcile his observations on optical illusions, with his conception of art. By executing variations upon geometric abstraction, he finally obtained his own optical modules he patented. Through the application of series processes, artworks become reproducible and feasible in as many mediums as possible. The first kinetic paintings were born in 1951. From 1955, he developed metal and ceramic wall panels, intended mainly for French buildings. In 1976 was inaugurated the ‘Vasarely Foundation’ in Aix-en-Provence, and in 1982, opened the Vasarely Centre in Oslo.

Most creative artist of the Op art movement, Victor Vasarely checkered geometric shapes with bright colours combined differently so as to give the impression of a fluctuating movement.