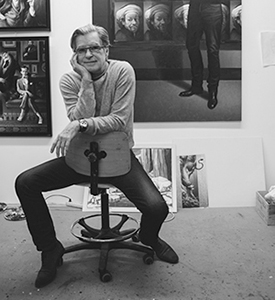 A trained architect, THIERRY BRUET born in Paris in 1949, painter and sculptor for more than 30 years is a Master of the traditional technique of oil-base painting, specialising in large portraits of well-known figures in society and decorative monumental works.

Commissioned by famous decorators such as Alberto Pinto, Frederic Méchiche, and Pierre-Yves Rochon… his works can be found in many collections throughout the world, as well as in many prestigious and luxury palaces such as the Hotel GEORGE V , the Hotel SHANGRI-LA Paris and the Palace Hotel LE BRISTOL in Paris, the HOTEL DE PARIS in Monaco, the hotel FOUR SEASONS in Alexandria and Cairo , the MERIDIAN HOTEL in Bahrain, , the hotel FOUR SEASONS in Florence , the hotel FOUR SEASONS in London, SOFITEL HOTELS of New York and London, the INSTITUT PAUL BOCUSE , the relais et chateaux the CHALET DU MONT D’ARBOIS in Megève,the POLO’S EVENING in Megève, HENRY BENDEL STORES in New York and the HERMES STORES in Paris ……….