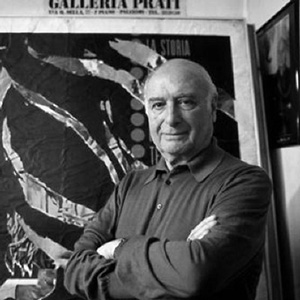 Domenico Rotella, nicknamed: Mimmo, was born in Catanzaro (Italy) in 1918, died in 2006. He was an important protagonist of the ‘New Realism’ movement. He was sensitive to the plastic lyricism of the posters plastered on the walls of cities, subject to weather conditions and anonymous lacerations. He studied at the ‘Academia di Belli Arti’ in Naples. He was interested in photography and photomontage, the technique of collage and assemblage, the phonetic poetry and the music of primitive societies. The art of Mimmo Rotella at the time was abstract, he made large graphic signs on neatly cut canvases. His first solo exhibition was organized in 1951 in Rome. After a stay at the University of Kansas City in 1951/1952 (USA), he returned to Rome and decides not to paint because he believed that “everything was done in painting.” It is from 1953 that the artist began to take off torn posters from the walls, almost like monochromes. Rotella highlights a street language, abstract and poetic. He produced numerous photographs, focusing on identifying the deep plastic aspect of urban wastes. In 1961, invited by Pierre Restany, he joined the ‘New Realists’ in Paris, where he would reside permanently: and where his artistic statement would become social and political. Rotella takes up movie posters that he transforms symbolically. He then participated in many international group exhibitions. From 1963 he experimented the process of photographic transfer on emulsified canvas with repetitive images from magazines or of his own “take-offs” (‘Artypos’ series on canvas or plastic substrate). He then became, in 1964, one of the initiators of ‘Mec Art’. He subsequently undertook a set of neo-expressionist paintings of cinema images. From the 1960s, the artist also proposed “various objects rotellisations” ready-mades where he diverts the objects from their habitual use (Rotella Metrica, 1966). This process culminates in the 1990s with the ‘Replicants’, porcelain replicas of the heads of ‘De Chirico’ blind models who, with goggles or masks, definitely brings us back to the strange familiarity of the objects.