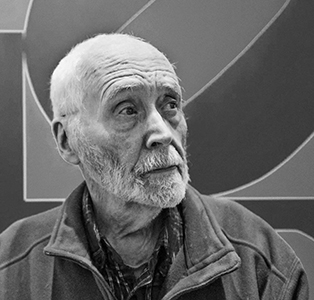 Robert Indiana is an American painter born in 1928 in New Castle (Indiana). Robert Clark, known as Robert Indiana, studied art from 1945 in several institutions: at the John Herron School of Art in Indianapolis, at the Art Institute of Chicago and at the Edinburgh College of Art during a stay in Scotland until 1954.

He moved to New York in 1958. In 1962, he participated in the “new realists” exhibition, which brought together a large number of international artists who also identified with Pop Art. Indiana was part of the second wave of American pop artists. He expresses himself through neon tubes, geometric shapes (circles, stars, pentagons) with uniform colours. He works a lot on graphic signs and manages to express himself through letters and numbers. From 1966, the word Love became his favourite motif; in 1973, it appeared on a US-Post stamp and then in the form of huge sculptures in aluminium or steel.

Indiana is the creator of the famous Love sculpture exhibited in the Love Park in Philadelphia. His work “Love” with the tilted “o” becomes a reference image in Pop Art. The artist will use it constantly, obsessively, invading North America. The Indiana paintings and serigraphs, which are often compared to Pop Art, are composed of words, signs and symbols that form an iconography that is specific to the American Hard Edge, cold and geometric abstraction movement.