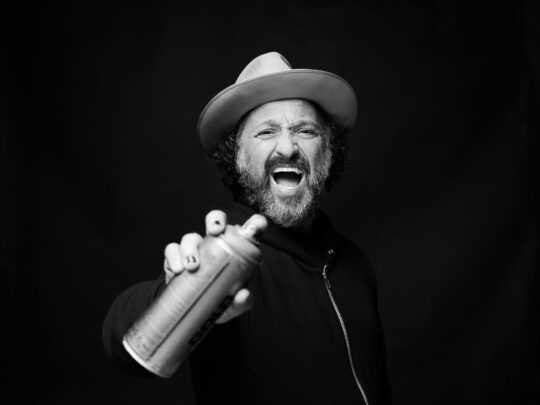 Mr Brainwash is the pseudonym of the Los Angeles based Street Pop artist “Thierry Guetta“. During the last decade, he undertook the realization of a fundamental documentary about street art. Inspired by the subject, he began to lay his own stencils and posters on the streets of Los Angeles and Paris and quickly became famous for his work representing Pop Art celebrities.

In June 2008, Mr Brainwash invests the legendary CBS studio in Los Angeles for his first solo exhibition “Life is Beautiful“. Very quickly his work acquires a recognition and Madonna invited him to create the sleeve of her album “Best of Celebration” and asked him to create the sleeves of her singles, DVDs and vinyl. In 2010, he unveils “Icons”, a 1,400 square meters exhibition in the heart of the Meatpacking District in New York in which he pays tribute to legendary artists. His artwork include portraits of musicians made of broken records and monumental sculptures made of recycled tires.

Mr Brainwash is also the subject of Banksy’s documentary “Exit Through the Gift Shop” which was shown at Sundance and Berlin in 2010.