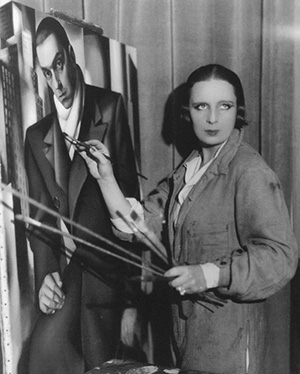 Tamara Lempicka, representative of the Polish Art Deco movement, was born in Poland 1898 and died in Mexico 1980.

Witness of an era, woman of her time, her paintings reflect the life she has led, from his travels around the world, attending high society of which she became the official portraitist. She fully participated in the Parisian artistic and social life where she met new models and fully affirmed her style. According to Tamara Lempicka: “Among a hundred paintings, you can recognize my own, my goal was: Do not copy. Creating a new style … light and bright colors, a return to elegance in my models “.

In the aftermath of the Roaring Twenties, her work gradually fell into oblivion until the rediscovery of Art Deco in the 1970s, when she became the icon of this artistic movement.