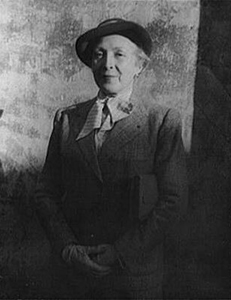 French painter and engraver, Marie Laurencin studied drawing with the painter Louis Jouas-Poutrel in a school in Paris and painting on porcelain in Sèvres from 1901 to 1903.  In 1904, she entered the Humbert Academy where her fellow students were Georges Braque, Francis Picabia and George Lepape. The latter admired her talents as a painter and pushed her to pursue her career as a painter while her mother disagreed with her aspirations as a free woman painter.

Marie was twenty years old when she met Henri-Pierre Roché who briefly became her lover and remained her mentor for a long time. He will contribute to the diffusion of Marie Laurencin’s works and will introduce her to many actors of the Parisian pictorial scene. In 1907, she met Clovis Sagot, a very influential art dealer who offered her her first exhibition in his gallery at 46, rue Laffitte in the 9th arrondissement of Paris. Marie Laurencin’s paintings were much noticed by the artists of the time and in particular by Pablo Picasso who inspired the young artist’s work. Pablo Picasso introduced her to Guillaume Apollinaire who would become her lover for several years. That same year, she took part for the first time in the Salon des Indépendants, alongside Picasso, Derain and Le Douanier. Then in 1913, Marie Laurencin met Baron Otto von Wätjen, whom she married the following year. As soon as the war broke out, the young couple went into exile in Spain. They settled in Madrid and then in Barcelona, and this exile lasted until 1919. Marie was very nostalgic for her life in Paris, Madrid was not to her liking, and in 1917, she left for Barcelona to join Francis Picabia and his wife Gabrielle Buffet. Thanks to this friendship with Picabia, Marie Laurencin exhibited in 1917 at the Modern Gallery in New York and also published two poems in Picabia’s magazine dada.

On her return to Paris in 1920, she forged deep and fruitful ties with many writers whose works she illustrated: Gide, Max Jacob, Marcel Jouhandeau, Jean Paulhan, Lewis Carroll, Henri-Pierre Roché and many others. Marie Laurencin became the official portraitist of the female social scene (Nicole Groult, Coco Chanel) in the 1920s. She exhibited regularly at the Rosenberg Gallery alongside Braque, Matisse and Picasso, and took part in the Durand-Ruel exhibition in New York, as well as the Petit Palais exhibition of independent art masters in 1937. That same year, Marie Laurencin is decorated with the Legion of Honour, the French State acquires the Rehearsal and commissions an engraving from her, Les Fêtes de la danse. Marie Laurencin also distinguished herself as a decorator for Serge Diaghilev’s ballet Les Biches, then for the Opéra-Comique, the Comédie-Française and Roland Petit’s ballets at the Théâtre des Champs-Elysées. She also created the label for the Château Mouton Rothschild in 1948. Marie Laurencin is a very popular artist in Parisian society. A free woman painter, she imposes her own pictorial style, independent of a masculine avant-garde universe. Her style is characterized by a particular use of fluid and suave colours, an increasing simplification of composition and a predilection for certain elongated and graceful female forms.