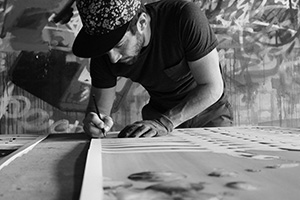 French street artist, currently living and working in France, between Clermont Ferrand and Paris, KURAR fell into the graffiti world in the late 90’s. For 10 years he has painted and has worked on 3D lettering, volume, and colors. With time and experience he diversified different techniques including: Graffiti, Stencils and Collage, to eventually focus on stenciling projects.

Through his work on canvas, KURAR manages to deal with current topics and encourages us to put our vision of society into perspective. By mixing antique characteristics with contemporary details, KURAR tackles sensitive issues such as war, religion, alienation and mass consumption with poetry and provocation.

The use and representation of childhood is one of the recurring points, part of the artist’s signature. He cleverly uses this symbol of innocence to contrast with the satirical and provocative significance of his representations. Since 2013, KURAR experienced a remarkable evolution marked by a solo show at the Onega gallery in Paris. He has since exhibited his work in galleries around the world particularly in New York, Los Angeles, Dusseldorf, La Reunion, Berlin… His artworks tinged with black humor and nostalgia serve the relevance and the consistency of his messaging, for the satisfaction of a broader public.