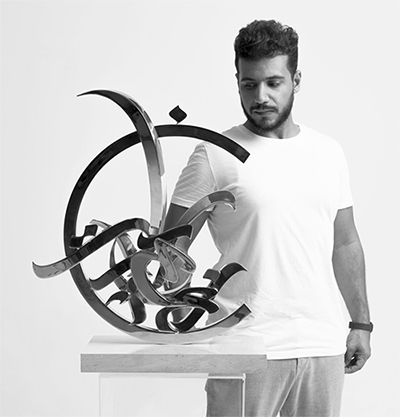 Born in 1990, INKMAN is a contemporary calligraphy artist graduated from the School of Science and Technologies of Design in Tunis capital of Tunisia.

At a young age, he was attracted to poetry, setting poems on paper where he expresses his love of humanity, respect and celebrates the spirit of tolerance. Then, during his studies graphic designer, he discovered the fascinating world of typography and the opportunities it provides for the creation and the visual composition of a work.

Therefore, he decided to combine the expression of personal feelings, calligraphy and geometric shapes deliver bold compositions on various media, first the wall and the canvas that  tame quickly.

INKMAN has remarkable during several projects, for the elegance of his work and the originality of his compositions, that show an unusual sensitivity and seduce the public. Inside harmoniously filled circles, a trained eye will decode short poems written spontaneously, mixing French and English in Latin characters. For others, it will be the finesse of the line and the agreement text and colors used to draw the eye.

With INKMAN, a restless artist in the sense of artist perpetually in research, his calligraphy becomes a universal language, inviting to beauty and understandable by all as evidenced by the success encountered at each of his interventions abroad in the Middle East and Europe.