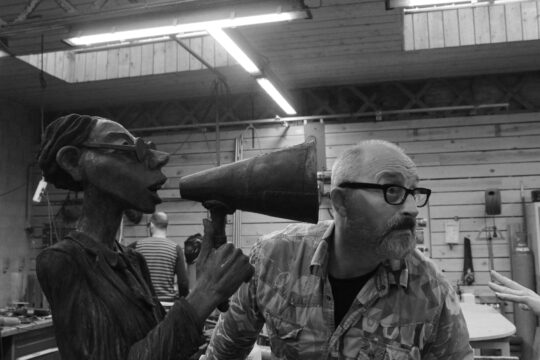 Dirk de Keyzer was born in Sleidinge near Ghent in 1958. For the past two decades, he has been charting his own course in the world of sculpture. He experienced difficulties in his early career but he always moved forward with determination, sure that he is made for being a sculptor. Sculpting is not a choice for Dirk de Keyzer, it is primarily his own nature. Although he puts his technical predisposition into his work, creating remains for him his biggest challenge, and the discovery of the final result his greatest satisfaction. Dirk de Keyzer especially sculpts elegant women with face full of conviction, but he will also give shape to men with wacky look. They exhale a joy for life without complexity and bring their observers to relativism. Dirk de Keyzer is a pure creator of shapes and silhouettes that echo to reality, and are also a true interpretation of harmony and aesthetic. Over time, his work escapes from reality and brings us into a singular and magical universe.