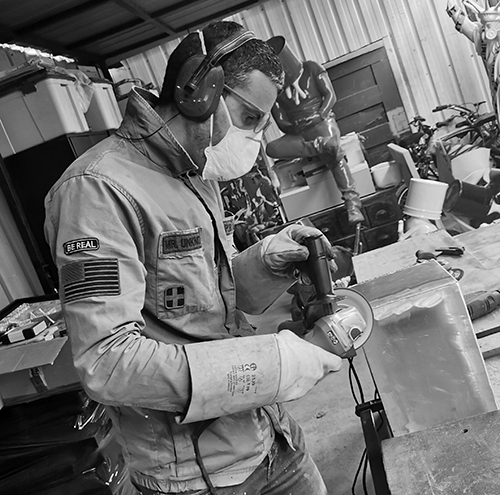 In less than ten years, that’s how long it took David DAVID to establish himself as one of the leading figures on the contemporary art scene. This artist, born in Nancy and adopted from Cannes, invites himself into the world of the plastic arts through his mythical character, the Head in Art, now known and recognized internationally. A sort of alter ego, he is born in the form of a sculpture representing a man cut off from the hustle and bustle of the city and society thanks to the bucket of paint in which he houses his head without moderation.

Very quickly the Head in Art is declined through several materials – bronze, aluminum, resin etc.. – and supports, while inviting himself on historical works such as the Venus de Milo or the bust of Hercules to whom the artist pays homage by stamping them with his signature. After Blind, a representation of modern man, the artist pushes the message to its paroxysm by multiplying his character ad infinitum in order to create a single work.

Bold and committed, David DAVID’s creations invite the spectator to enter a resolutely colourful and poetic universe, marked as much by humour as by self-mockery. Thus, through the multiple variations he creates of his character, with which everyone can easily identify, David DAVID manages to share his emotions with his audience, whether through sculpture or painting.

“Work seriously, but don’t take yourself seriously” is his credo.