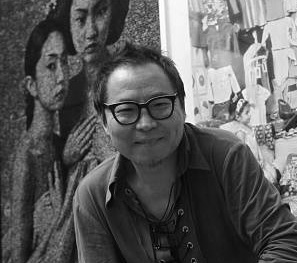 Chong-Il Woo was born in Korea in 1957. He Graduated from the Pacific Northwest College of Art in Portland, Oregon, in 1982 and later obtained an associate degree in Photography at Portland College in 1986.

Woo worked as a fashion photographer in the US, contributing regularly to Vogue and Harper’s Bazaar magazine.

Women of the Joseon Dynasty is an example of Woo’s reinterpretation of Korea’s modern history, which he achieves by re-photographing historically well-known people with modern people.

The artwork also challenges its own identity because the photograph is textured with individually shot pebbles and gem stones.