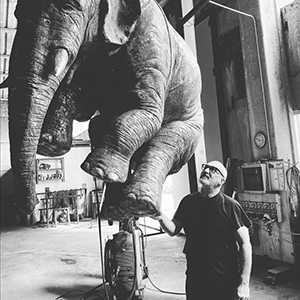 Stefano Bombardieri was born in 1968 in Brescia, Italy, he is a visual artist and sculptor. He spent part of his childhood in the workshop of his father, himself a sculptor. As a young apprentice, he experimented with artistic techniques and materials, inventing new and original methods. Influenced by his father’s style, he also drew his inspiration from the great masters of art such as Balla, painters of the futurist movement, Boccioni, Henry Moore, a sculptor of the beginning of the 20th century, or Piero Manzoni.

Passionate and creative, he shows interest in all forms of art, from the world of design to that of applied art. He has a philosophical approach in his creations as the artist addresses themes such as pain, time and its perception. Very meticulous, the artist creates sculptures with a particular attention to detail. His style is described as hyper-realistic. These works take on the appearance of frozen fossils, sometimes impressive, sometimes disturbing, and seem to escape the rules of time and physics, frozen in a form of immortality.